3D
Scan The World
2,283 views 79 downloads
Community Prints Add your picture
Be the first to share a picture of this printed object
0 comments

This is an almost lifesize marble head fragment of a Satyr playing a Double Flute. It is originally Roman from the Imperial period, 1st century AD. It is a copy of a Greek work of the 3rd century BC

This satyr with pointed animal ears is one of the many wild creatures that cavort in the train of Dionysos, god of wine. His brows and lips are puckered and his cheeks distended as he plays a double flute. Such realistic rendition of an exaggerated momentary action is typical of Hellenistic art. 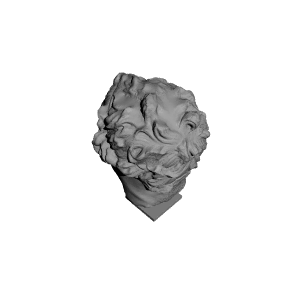