Marble Head of a Sphinx

Marble Head of a Sphinx

Jucker (op. cit.) identifies this head as a sphinx due to two subtle features: first the facial asymmetries shifted to the right as seen in the unequal distances between the inner canthi and the nose; and the minor right-turn of the head on the straight neck. The sober gaze emanating from the almond-shaped eyes and the unevenness of the center-parted hair-- additional traits of the sphinx type-- can be seen in another sphinx at Princeton (see no. 12 in B.S. Ridgway, ed., Greek Sculpture in the Art Museum of Princeton University). The prototype for these sphinx heads is probably a late fifth century Greek sculpture in bronze later adapted by a Neo-Attic workshop in the first century B.C.

Two other similar sphinx heads are in the Fitzwilliam Museum (nos. 40-41 in L. Budde and R. Nicholas, A Catalogue of the Greek and Roman Sculpture in the Fitzwilliam Museum, Cambridge). The marble’s thick-grained crystal structure and yellow alabaster-like color is unusual, which Jucker believes makes this head intended for decorative purposes, possibly for insertion in a herm. 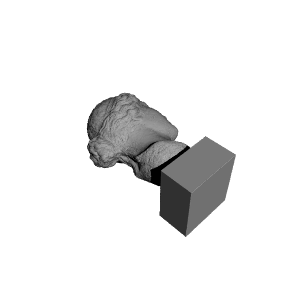 Thanks for the incredible scan! Printed beautifully with just a few supports. I tilted the head back a bit so I could print all the face feautures without any supports.