Mother and Child at the Sainsbury Centre for Visual Arts, Norwich

3D
Scan The World
3,691 views 254 downloads
Community Prints Add your picture
Be the first to share a picture of this printed object
0 comments

Mother and Child at the Sainsbury Centre for Visual Arts, Norwich

This sculpture is the culmination of Henry Moore’s three year exploration of the mother-and child theme between 1930 and 1932, it was the most demanding sculpture the artist had attempted up until that time. Documentation shows Moore made several changes to the lower half of the sculpture, originally the legs were draped, but the artist abolished the folded drapery, carving a hole in the bench and large heavy legs, balancing the lower half of the sculpture with the mother’s exaggerated shoulder.

"From very early on I have had an obsession with the Mother and Child theme. It has been a universal theme from the beginning of time and some of the earliest sculptures we’ve found from the Neolithic Age are of a Mother and Child. I discovered when drawing, I could turn every little scribble, blot or smudge into a mother and Child. (Later, I did the same with the Reclining Figure theme!) So that I was conditioned, as it were, to see it in everything. I suppose it could be explained as a "Mother" complex". - Henry Moore 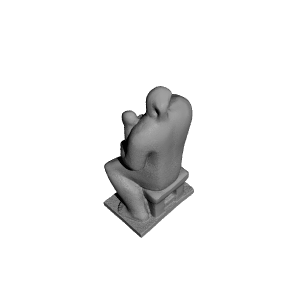 ×
0 collections where you can find Mother and Child at the Sainsbury Centre for Visual Arts, Norwich Da Scan The World