Nature Unveiling Herself Before Science

3D
Scan The World
1,624 views 298 downloads
7 collections
Community Prints Add your picture
Be the first to share a picture of this printed object
0 comments

Nature Unveiling Herself Before Science

This allegorical sculpture has been created as a commission for the National Art’s Conservatory. The sculpture appears in marble and mixed medias such as malachite which is the material in which the scarab was sculpted and onyx, used for the gown.

The female figure is partially covered by a veil and a robe held by a scarab at the top. According to multiple interpretations of the meaning behind the sculpture, the veil represents the veil of Isis which is the representation of nature covering and hiding her secrets. This sculpture is an emblematic symbol of Scientific Revolution. 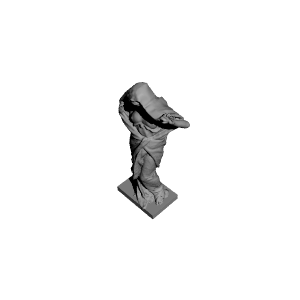