3D
360°
Featured Scan The World
1,569 views 210 downloads
1 collection
Community Prints Add your picture
Be the first to share a picture of this printed object
0 comments

The boasting mortal Niobe cowers before her punishment by the gods.

These two figures were originally part of a larger group depicting the killing by the gods of Niobe and her children. The groiup was probably set up by Seleukos, a king of Cilicia in south coastal Asia Minor. It was moved to Rome in 38 BC to decorate the rebuilt temple of Apollo in the Campus Martius.

The original o this cast was damaged in a bomb blast at the Uffizi in 1993; restored and rediplayed in 2006.

As usual, we only have later Roman copies to show us what the original was like. But the strong emotional content of the sculpture, a favourite theme of Hellenistic styles, is clear. 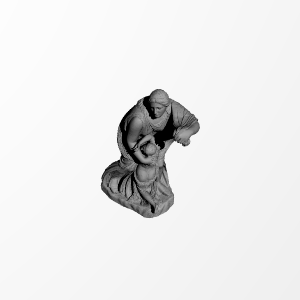