3D
Scan The World
3,456 views 256 downloads
2 collections
Community Prints Add your picture
Be the first to share a picture of this printed object
0 comments

When Eurydice dies of a fatal snake bite to her foot, Orpheus refuses to accept that he will never see his beloved wife again, and so attempts to achieve the impossible by retrieving her from the Underworld.

Putting the supernatural creatures in his path under the spell of his divine lyre music, Orpheus manages to get through all of the obstacles of the Underworld. As a reward, he is granted the opportunity to lead Eurydice back to life with him, on the condition that he never looks back at his ghost wife as they exit the Underworld.

Tragically, Orpheus fails to meet the obligations of the deal and in a moment of madness he looks back at Eurydice, condemning her once more to the shadows.

Eurydice was the wife of Orpheus, who loved her dearly; on their wedding day, he played joyful songs as his bride danced through the meadow. One day, Aristaeus saw and pursued Eurydice, who stepped on a viper, was bitten, and died instantly. Distraught, Orpheus played and sang so mournfully that all the nymphs and deities wept and told him to travel to the Underworld to retrieve her, which he gladly did. After his music softened the hearts of Hades and Persephone, his singing so sweet that even the Erinyes wept, he was allowed to take her back to the world of the living. In another version, Orpheus played his lyre to put Cerberus, the guardian of Hades, to sleep, after which Eurydice was allowed to return with Orpheus to the world of the living. Either way, the condition was attached that he must walk in front of her and not look back until both had reached the upper world. Soon he began to doubt that she was there, and that Hades had deceived him. Just as he reached the portals of Hades and daylight, he turned around to gaze on her face, and because Eurydice had not yet crossed the threshold, she vanished back into the Underworld. When Orpheus later was killed by the Maenads at the orders of Dionysus, his soul ended up in the Underworld where he was reunited with Eurydice.

The story in this form belongs to the time of Virgil, who first introduces the name of Aristaeus and the tragic outcome. Other ancient writers, however, speak of Orpheus's visit to the underworld in a more negative light; according to Phaedrus in Plato's Symposium, the infernal deities only "presented an apparition" of Eurydice to him. Ovid says that Eurydice's death was not caused by fleeing from Aristaeus, but by dancing with naiads on her wedding day. In fact, Plato's representation of Orpheus is that of a coward; instead of choosing to die in order to be with the one he loved, he mocked the deities by trying to go to Hades to get her back alive. Since his love was not "true"—meaning he was not willing to die for it—he was punished by the deities, first by giving him only the apparition of his former wife in the underworld and then by being killed by women.

The story of Eurydice may be a late addition to the Orpheus myths. In particular, the name Eurudike ("she whose justice extends widely") recalls cult-titles attached to Persephone. The myth may have been derived from another Orpheus legend in which he travels to Tartarus and charms the goddess Hecate.

The story of Eurydice has a number of strong universal cultural parallels, from the Japanese myth of Izanagi and Izanami, the Mayan myth of Itzamna and Ixchel, the Indian myth of Savitri and Satyavan, to the Akkadian/Sumerian myth of Inanna's descent to the underworld. From the Bible, the story of Lot and his wife is also "often compared to the story of Orpheus and his wife Eurydike."

Print standing up with support, 0.1mm layer height. Use a brim to keep it stabilized. 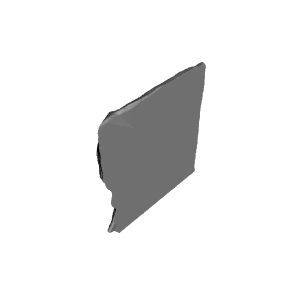