3D
Scan The World
3,134 views 167 downloads
Community Prints Add your picture
Be the first to share a picture of this printed object
0 comments

Domitian (r. A.D. 81-96), the third and final member of the Flavian dynasty of Roman emperors, was the younger son of Vespasian (r. A.D. 69-79) and brother of Titus (r. A.D. 78-81). Unlike his father and his brother, he was not regarded as a popular ruler and suffered damnatio memoriae [a] after his assassination. Nevertheless, several marble portraits of Domitian survive- the present example is one of the finest. This realistic portrait of him at about age forty expresses something of the absolute power that Domitian wielded over the entire Roman world, but it also depicts personal characteristics- notably, he wears a wig that concealed his baldness in later life.

Despite hostile accounts of his reign written by senatorial authors such as Tacitus and Suetonius in the early second century A.D., he was a competent administrator, economist and military leader. He lead successful campaigns in defense of the Rhine and the Danube frontiers, and his troops also saw action on other fronts, from Scotland in the north to Azerbaijan in the east. He did much to rebuild Rome after the disastrous fire of A.D. 64 and completed the construction of the Flavian amphitheater, better known as the Colosseum.

According to Suetonius, Domitian was the first emperor to assume the titles dominus et deus (lord and divinity) and to insist on subservience from senators, officials, and citizens alike. It was his self-aggrandizement and authoritarianism that not only earned him his reputation for greed, debauchery, and cruelty but also led ultimately to his death at the hands of his own courtiers. 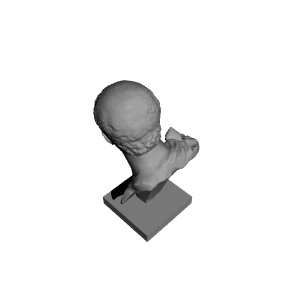