This head sculpted by Escoula and entitled “La Doleur” is the one of Pierre de Wissant. Escoula worked with some of the greates French artists of the time: Rodin and Carpeaux, while also focusing on his own studies and career at the same time.

This head, is taken from the group named “The Death of Procris” which was exposed in 1890. The group was inspired by an episode of Greek mythology. Procris, married to Cephalus, was vey jealous of her husband. One day while she was spying on him behind some bushes, she accidentally moved a branch which looked just like a pray to the hunting husband. Cephalus, thinking to shoot an animal in the bushes, killed his beloved wife instead.
This head sculpted represents the extreme sorrow that Cephalus felt once he found out that he actually killed his wife.

This specific sculpture is a plaster directly moulded by the artist during the middle stage of his creative process. It is not yet completed but we can see the fingerprints of the sculptor and also traces of the moulder’s palette knife. 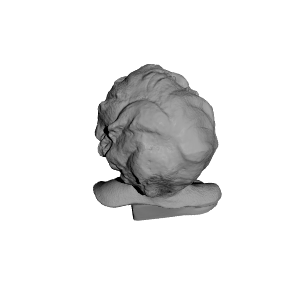 ×
1 collections where you can find Sorrow Da Scan The World