St George and The Dragon Flanked by The Dandolo Arms

3D
360°
Scan The World
1,535 views 167 downloads
3 collections
Community Prints Add your picture
Be the first to share a picture of this printed object
0 comments

St George and The Dragon Flanked by The Dandolo Arms

St George and The Dragon often featured on houses in Venice belonging to the Scuola degli Schiavoni (Guild of the Slavs) or its members. St George was the patron saint of Dalmatia, and the guild was set up for the benefit of Slav merchants. From Italy, Venice.

These reliefs were originally set in the external wall of a house near the Ponte dei Baretteri, Venice, where they were seen and vividly described by the celebrated art critic John Ruskin (St Mark's Rest, 1877-84). He noted the 'most consummate precision of artistic skill. Look at the strap of the stirrup- at the little delicatest line of the spur, - can you think they are stone? don't they look like leather and steel? His flying mantle. - is it not silk more than marble?'

There are other examples of similar reliefs surviving in Venice and they seem to have been installed on houses owned by prominent members of the Scuola degli Schiavoni, the religious guild run by Dalmatians (Slavs) for the benefit of visiting seamen from their homeland. The Dandolo, whose arms appear on the two shields, were one of the richest and most important Venetian noble families. 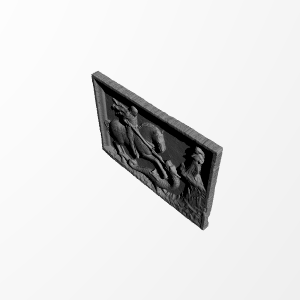