Statue of Augustus as Jupiter

3D
Scan The World
3,239 views 390 downloads
1 collection
Community Prints Add your picture
Be the first to share a picture of this printed object
0 comments

Statue of Augustus as Jupiter

Under Octavian Augustus (63 BC - 14 AD) the Roman state became in effect a monarchy, whilst preserving all the appearance of a republic. Augustus was officially known as princeps, i.e. the first in the list of senators, and the citizens erected numerous statues of him. Suetonius wrote, however, that "temples in his honour he did not allow to be raised in the provinces, save those with a dual dedication to himself and the goddess Roma. And in Rome itself he rejected the honour outright". After his death Augustus was deified. In the Hermitage statue, created during the reign of one of Augustus's followers in the first half of the 1st century, Augustus is shown seated on the throne as Jupiter, highest of all the Roman gods. The model for the composition was a statue of Zeus the Olympian by Phidias, a 5th-century BC Greek sculptor. In the idealized features of the young face we can easily see the likeness of Augustus. "Divine nakedness" was used only for images of the immortals, while portrait sculptures of Romans had to include either a toga or military attire. The statue of Octavian Augustus is a marvellous example of Augustan Classicism, a trend seen in the early Empire period, combining the Roman realistic tradition with Greek Classicism. The piece is also a typical example of 19th-century restoration: the statue, found in pieces in the town of Cumae, was restored by an Italian sculptor using both old and new pieces. In his reconstruction he did, however, rely on images of the Emperor as Jupiter enthroned, which could be seen on ancient coins and carved gems. 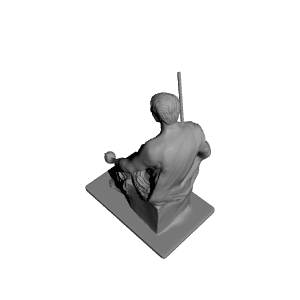