3D
360°
Scan The World
2,058 views 366 downloads
2 collections
Community Prints Add your picture
Be the first to share a picture of this printed object
0 comments

The centrepiece of Leopoldplaats in Antwerp, this statue of Leopold I atop a horse was created to celebrate the 25th anniversary of the accession of the first king of Antwerp, Leopold I.

The bronze statue was cast by Joseph Geefs, a local sculpor whose brother Willem cast the famous statue of Rubens at the Groenplaats.

The statue was moved to its current position in 1872. The following year the square, previously known as St. Jorisplein was renamed Leopoldplaats in honor of the former king. 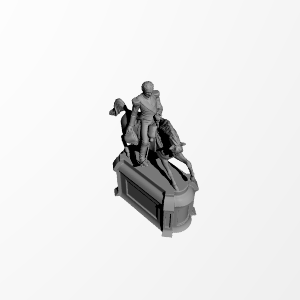