3D
Scan The World
2,547 views 613 downloads
6 collections
Community Prints Add your picture
Be the first to share a picture of this printed object
0 comments

This is a plaster of a marble sculpture originally commissioned to decorate the façade of the Opera Garnier in Paris. The sculpture was considered to be a scandal and was not very well appreciated among the public, it was even vandalized from an anonymous vandal who threw ink all over it.

The figures appear naked in dancing poses, holding hands, interacting with each other. The actresses and the dancers in the figure were models from the Palais-Royale. This nakedness was what transformed this sculpture into a shameful group when it was first unveiled in public in 1868. 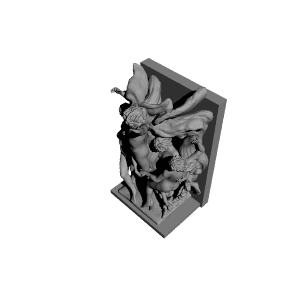