3D
Scan The World
3,880 views 223 downloads
Community Prints Add your picture
Be the first to share a picture of this printed object
0 comments

The first is a cold monochrome sculpture by Miquel Blay, of which there are several versions, at least one cut in white marble and a bronze, which was first exhibited at the National Exhibition of Madrid, 1892 . With this work Blay broke the traditional language that had remained realistic sculpture throughout the nineteenth century. The marble version is at the MNAC in Barcelona while the bronze sculpture is at the Regional Museum of Garrotxa in Olot.

It is set in the early beginnings of Catalan modernism, which officially begins between the Universal Exposition in Barcelona in 1888 and the loss of the last Spanish colonies in 1898. It's still a realistic sculpture, but it wants to be modernist and incorporates new features compared to traditional realistism. Modernism had not yet been clearly defined, but there was already a desire to continue the Catalan Renaissance style, while incorporating the European avant-garde, for example, romanticism and symbolism, the desire to stop copy reality (or anecdotes monumental works) to express ideas or symbols. The Catalan sculpture of the time inspired much of the symbolism of Rodin, who renewed the sculptural language.

The volume of the sculpture is round and is finely crafted. The view is frontal, static sculpture and expressive, with a formal, marble polish.

The sculpture shows two people, a man and a girl, probably grandfather and granddaughter sitting on a stone bench. The girl seems to enjoy the protection of a man. The characters are naked, which further dramatizes the scene, big contrast between the body of the man and with the softer lines of the girl.

The man has a beard and look of resignation. The curved back, knees together, hands joined between them convey the cold weather. The gesture girl is tender and full of love, staring at the man. He looks instead to the spectator. One detail that shows the vulnerability of the child and helps to express tenderness is that it comes down to earth. The legs are too close together to protect themselves from the cold, but most are toward the man, acting as the source of heat.

The structure of the sculpture is formed by a horizontal rectangle, which corresponds to the bank on which rests the base of a triangle rectangle. The body of the girl and the two heads of the diagonal triangle mark. The girl's legs are another diagonal, prolonged to join the tip of the triangle. The arm and leg of the man is beside the girl, forming the vertical side of the triangle. In general, the vertical lines correspond to the man while the diagonal part of the body defenseless girl.

The marble version belongs to idealism, a trend boosted by Jose Limon and Arts Center of St. Luke. They begin to appear as the principles that define modernism, such as symbolism (blurring bodies and marked mood of the characters). Some details of realism are, for example, marked by the bones of the child, especially the ribs and hips. Idealism is stumping in by smoothed curves of the girl and the suffering caused by the cold is idealized in a tender scene.

This work contrasts the realism of the man with the idealism of the child. The refined technique and expressiveness of the characters are key features of his work. It is an early Symbolist painting in Spain. 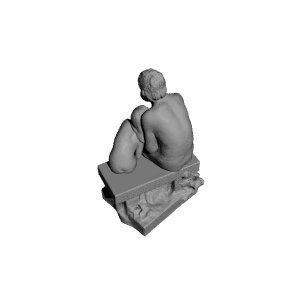