The little arch of Galerius

3D
Scan The World
2,735 views 351 downloads
2 collections
Community Prints Add your picture
Be the first to share a picture of this printed object
0 comments

The little arch of Galerius

This arch was chiseled from one piece of marble, known as "the little arch of Galerius".

This was the crown of a small palace temple. Its central motif consists of two medals decorated with busts, held by two young Easterners. The right medal depicts Galerius in formal military attire, and the left one depicts his wife, Augusta Galeria Valeria.

After her murder, her figure was reworked into a divinity, perhaps the Tyche (Fortuna) of Thessaloniki (as her tower-like crown indicates).

Between the medals are winged Cupids holding garlands. On the sides, the god PPan is depicted along with a Nymph, and on the intrados (interor of an arch) we see Dionysus depicted on a medal.

This piece comes from an Imperial workshop in Thessaloniki. 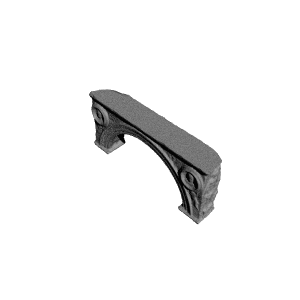