3D
Scan The World
2,373 views 120 downloads
Community Prints Add your picture
Be the first to share a picture of this printed object
0 comments

The pose of this boy, who appears ready to jump up, recalls paintings and sculpture by Michelangelo, to whom the statue was once attributed. But the refined physique reflects Susini's training by his uncle Antonio, an assistant to the late 16th-century bronze sculptor Giovanni Bologna. In Florentine art the city's patron saint, John the Baptist, often appears as a boy, providing a devout role model for children. The Lamb of God at his feet symbolizes Jesus, whose coming John foretold. With holy water filling the shell in John's hand, the statue might have stood against the wall of a chapel, with one figure gazing toward the altar, the other toward entering worshippers. 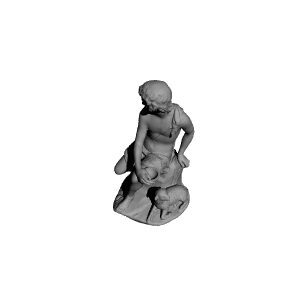