3D
360°
1,513 views 38 downloads
Community Prints Add your picture
Be the first to share a picture of this printed object
0 comments

UPDATE: DEC. 2019 - Earlier this month my TP Protector Mk2 here had a critical failure on one of the loops used to hold it up. It wasn't working quite as flawlessly as I imagined anyways. The cat could still get to the paper from the top if she was feeling particularly ignored and needed to let me know by eating some more paper. I think she was also pulling down on the part which caused the critical failure in the loop. I've gone back to the drawing board and designed a new version which should be much more sturdy and provide better protection. Updated version can be found here: https://www.myminifactory.com/object/3d-print-tp-protector-mk5-108133

I adopted Trixie back in May. She has a mysterious but seemingly sad history in her (about) three years, but she's proven to be incredibly happy, loving, and friendly with me... but not so much towards my toilet paper. A couple weeks ago she developed a habit of chewing on it. Not a huge problem but kind of weird considering it's purpose, so I wanted to deter the behavior. I turned to my old friend 3D printing to help.

I found a few 3D models that would work, but only one that looked like something I'd want. I tried it but it actually did not cover enough of the roll in my opinion. Between it not covering enough of the circumference of the roll, and it's length being a bit short, it just rolled around on the shaft a lot leaving most of the roll exposed.

I did an initial design in Fusion 360 that was basically a cylinder with a chunk missing, but it proved both too long and difficult to print. It fit on the roll but brushed up against the arms more than I'd like, and the cylinder design meant it had to be printed on it's side, but the missing chunk meant there was a good bit of supports and bridging that wasn't terribly successful on my FLSun QQ-S. I went back to the drawing board (or sketch editor I guess?) and decided a polygonal design would print much easier while I shortened it up by 1cm. I could have cut the length more but decided against it since it blocks more of the roll.

I'm pretty happy with how this turned out. It's more than generic enough that it should work with almost any toilet paper roll holder of standard length, and should fit any standard sized rolls and likely will fit the slightly larger than standard rolls (in terms of how much paper is on the roll). I've had it on for a few days now and haven't found any bite marks on the roll so I'm guessing it's working.

Designed with 4mm total width walls to give it enough mass to be very unlikely to break/snap, printed with 2 perimeters (0.8mm walls on a .4mm nozzle) and 10% infill.

Pictured TP Protector was printed on a Prusa i3 MK3S in Prusament Galaxy Black PLA. No raft, no brim, I did use support enforcers in PrusaSlicer to support the rings for a smoother finisher but it's not absolutely necessary. Model is oriented so it should just work.

While not necessary, I used support enforcers on the rings to ensure they printed smoother. If your printer has good part cooling and/or you don't mind a couple layers having a bit of droop on the rings I expect it will be fine on it's own. 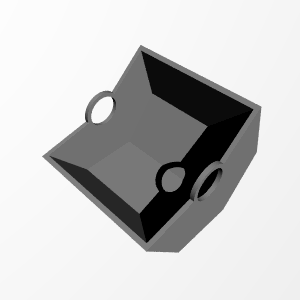