3D
Featured Scan The World
3,168 views 135 downloads
2 collections
Community Prints Add your picture
Be the first to share a picture of this printed object
0 comments

The tree stump was a popular grave marker in the late 19th century through the early 20th century. While originally created for the fraternal order of the Woodsmen of the World, tree stump markers were soon available widely via catalog and local stone shops. This example is carved from limestone.

It is a touching tribute to a child who died too young as symbolized by the truncated tree. Her straw hat and empty boots rest at the base of the stump. The bark has peeled down to reveal her name, those of her parents, the dates of her birth and death and an epitaph.

This model was printed at the 'Fine' setting in Cura. This particular model benefits from using a higher quality print setting to show all the details from the weave of the straw hat to the lettering of the inscriptions and the growth rings on the cut limbs.

It requires extensive supports and much patience to remove them post-printing. The majority of the supports are for the underside and rear of the ivy leaves and the peeled bark. Additional supports are needed for the hat and limbs. 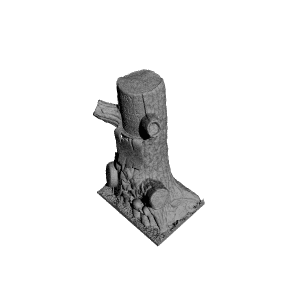