3D
Scan The World
3,150 views 118 downloads
Community Prints Add your picture
Be the first to share a picture of this printed object
0 comments

This Tufa head of a sphinx or siren is Etruscan, probably Vulcian originating from 550-525 B.C. donated by the Fletcher Fund in 1924 where it is on permanent display at the Metropolitan Museum of Art in New York.

This large head, made of volcanic stone, probably represents a sphinx or siren. Statues of both mythical creatures, usually depicted by the ancients with human female heads and winged animal or bird bodies, were often placed as guardians near the entrances to Etruscan tombs. The large winged lion on display in this large gallery (also uploaded on Scan The World and MyMiniFactory) is a better preserved example of the same type of stone sculpture. The style of this female head, with its almond-shaped eyes, Archaic smile, and wig-like hair arrangement is strongly reminiscent of Greek, especially Ionian examples. A number of related sculptures, all associated with ancient tombs at Vulci, are in other collections. One of the closest parallels for the Museum's head is in the Ny Carlsberg Glyptotek, Copenhagen. 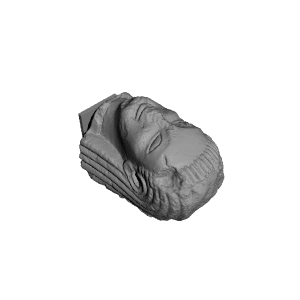