3D
Scan The World
3,605 views 315 downloads
4 collections
Community Prints Add your picture
Be the first to share a picture of this printed object
0 comments

This is a marble two-sided relief originating from Rome and carved in the Imperial period in the 1st century A.D. The peristyle gardens of Roman houses and villas were filled with decorative marble reliefs such as this one. The masks of a young maenad and a bearded silenus are carved on one side in high relief. A shepherd's crook, known in antiquity as a pedum, and two cymbals rest between them. Dionysiac cult objects and theatrical masks were often depicted on similar marble ornaments found in Pompeii, where they were suspended between the columns of the peristyle or set on tall pillars around the garden. Other themes, however, are also represented; on the other side of this piece, in low relief, a ketos, or sea monster, rides atop the waves. 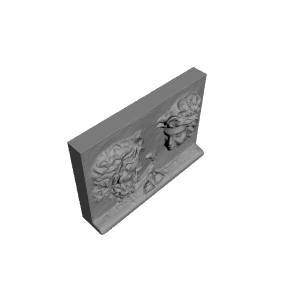