3D
Scan The World
1,860 views 204 downloads
Community Prints Add your picture
Be the first to share a picture of this printed object
0 comments

Moore made the human figure the primary source of his sculpture and noted, "There are three fundamental poses. One is standing, another is seated, and the third is lying down" (quoted in D. Mitchinson, Henry Moore Sculpture, London, 1981, p. 86). Alone among the major sculptors of the human figure in the first half of the 20th century-Auguste Rodin, Émile Bourdelle, Aristide Maillol, Henri Matisse, Jacques Lipchitz, Jean Arp and Alberto Giacometti--Moore concentrated on the reclining figure, and this pose far outnumbered seated or standing figures in his work. He gave two reasons for this choice. The first is a practical one, in that the extreme weight of carved stone is more easily distributed in a horizontal figure than in a vertical one; and the second, that there are inherently more variations in a reclining pose than in an upright one.

When one encounters a standing or upright pose in Moore's work, as in the present sculpture, the figure is no longer passive or receptive, but instead fills the space in an aggressively modern and confrontational manner, similar to that seen in the work of the above-mentioned sculptors. It is probably for this reason that Moore's upright figures tend to be more abstract in appearance than his reclining subjects, where the emphasis is on a more traditional delight in the sensuousness of the female figure. An upright figure usually possesses the advantage in projecting a more active and potentially heroic sensibility. Furthermore, it may be enjoyed more fully in the round, whereas the reclining figures are best appreciated from one or two vantage points only.

Vertical figures are frequently encountered among the many smaller works that Moore executed in his final years, because their reduced scale freed the artist from concerns about balancing tall weights. In contrast to the reclining figures, the vertical forms display more overtly the surrealist and organic aspect of Moore's feeling for forms.
The abstract impulse which became increasingly manifest in Moore's late sculptures follows on his belief that "We must relate the human figure to animals, to clouds, to the landscape--bring them all together. By using them like metaphors in poetry, you give new meaning to things" (quoted in A. Wilkinson, ed., Henry Moore Remembered, Toronto, 1987, p. 122). 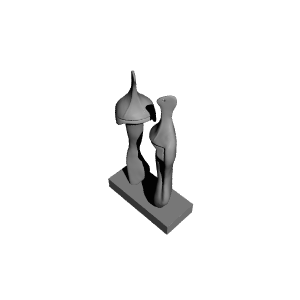