3D
Scan The World
2,320 views 97 downloads
Community Prints Add your picture
Be the first to share a picture of this printed object
0 comments

Hnery Moore, the artist, commented: 'In 1955 I was asked to consider making a sculpture for a courtyard of a new building [Olivetti] in Milan. I visited the site and a lone Lombardy poplar growing behind the building convinced me that a vertical work would act as the correct counterfoil to the horizontal rhythm of the building. This idea grew ultimately into the ‘Upright Motifs’. Back Home in England I began the series of maquettes. – I started balancing different forms one above the other, - with results rather like the North-West American totem poles, - but as I continued the attempt gained more unity, also perhaps more organic, - and then one in particular (later to be named ‘Glenkiln Cross’), took on the shape of a crucifix, - a kind of worn down body and a cross merged into one.' 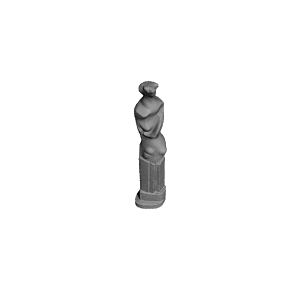 ×
0 collections where you can find Upright motive in Pasadena, California Da Scan The World