3D
Featured Scan The World
10,834 views 2,514 downloads
12 collections
Community Prints Add your picture
Be the first to share a picture of this printed object
3 comments

In the figure of Venus, the Roman goddess of love, the sculptor John Gibson found his ideal subject. This work, with its softly modelled face and elegant curves, depicts a paragon of female beauty, a match for the classical statues that the sculptor so ardently admired. And yet Gibson strove to suggest a beauty beyond the physical. In an account of his life, published in 1870, he is quoted as saying, "the expression I endeavoured to give my Venus was that spiritual elevation of character which results from purity and sweetness, combined with an air of unaffected dignity and grace."

Venus holds an apple, the award bestowed upon her by the shepherd Paris for her beauty. It is a fruit often associated in art with carnal love, but Gibson has called his statue Venus Verticordia - 'the turner of men's hearts.' This is not the flighty, promiscuous Aphrodite of Greek myth, but the virtuous, maternal Venus who oversaw the foundation of Rome. The Romans venerated Venus Verticordia on April 1st as a goddess of chastity, as the poet Ovid recounts in his poem about the Roman calendar, Fasti, book 4, 157-161:

"In the time of our ancestors, Rome had lost its sense of shame, so they consulted the venerable Cumaean Sibyl. She ordered a temple to Venus to be built; and, this done, the goddess took the name Verticordia."

At the statue's feet, almost hidden by her drapery, is a tortoise upon which the artist has carved a Latin inscription, OPUS IOANNIS GIBSON ROMAE - "the work of John Gibson, Rome." The animal probably alludes to the goddess' legendary birth from the sea.

"The human figure concealed under a frock coat and trousers is not a fit subject for sculpture". 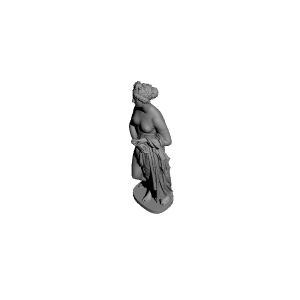 ×
12 collections where you can find Venus Verticordia Da FitzwilliamMuseum