3D
Scan The World
2,074 views 85 downloads
Add to collection
3 0
Community Prints Add your picture
Be the first to share a picture of this printed object
0 comments

Adeline Virginia Woolf (née Stephen; 25 January 1882 – 28 March 1941), known professionally as Virginia Woolf, was an English writer and one of the foremost modernists of the twentieth century.

During the interwar period, Woolf was a significant figure in London literary society and a central figure in the influential Bloomsbury Group of intellectuals. Her most famous works include the novels Mrs Dalloway (1925), To the Lighthouse (1927) and Orlando (1928), and the book-length essay A Room of One's Own (1929), with its famous dictum, "A woman must have money and a room of her own if she is to write fiction."

Woolf suffered from severe bouts of mental illness throughout her life, thought to have been what is now termed bipolar disorder, and committed suicide by drowning in 1941 at the age of 59.

This bust of the writer Virginia Woolf, cast from a 1931 sculpture by Stephen Tomlin (1901–1937), was unveiled in 2004 at the south-west corner of Tavistock Square. Woolf lived at 52 Tavistock Square between 1924 and 1939. From there she and her husband Leonard Woolf ran The Hogarth Press, which became a prominent and influential publisher at the forefront of modernist fiction and poetry (publishing T.S. Eliot, E.M. Forster and Katherine Mansfield among others) and translating the works of Sigmund Freud into English. Their house was destroyed by a bomb in October 1941 during the London blitz. The south side of the square where Woolf lived is now occupied by a hotel.

Easy printing, supports needed for the head but really easy to remove. 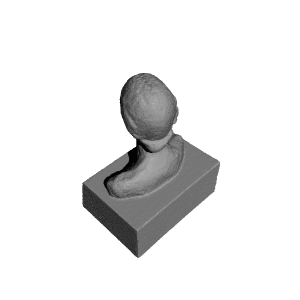 ×
0 collections where you can find Virginia Woolf bust Da nebulousflynn