3D
Scan The World
1,958 views 80 downloads
1 collection
Community Prints Add your picture
Be the first to share a picture of this printed object
0 comments

Chicago Title & Trust Center is an office tower located in Chicago designed by the firm Kohn Pedersen Fox Associates. Before completion in 1990 the twin tower design was awarded The Chicago Athenaeum's "Best Building" Architecture Award,the award was received by one of the lead designers Kevin Flanagan.( view PLP Architects ). The fifty-storey building rises 756 feet (230 m) in the Loop and was completed in 1992, on the site of Chicago's Greyhound Bus Station. Previously, a structure at 111 West Washington was known as the Chicago Title & Trust Building. After CT&T moved to the new tower in 1992, its former home became known as theBurnham Center. The new structure is sometimes simply referred to as the Chicago Title Tower. One of the tower's most notable features is its eastern-facing slanted roof at upper levels. At night, the top of the building facing east and west is flooded with light, creating a memorable presence on the Chicago skyline. The building was originally intended to have a twin at 181 N. Clark Street, but the plan has been dropped twice: first after the original completion of the first tower, and then again in 2001 after the 9/11 terror attacks. A multi-level parking structure currently occupies the space where the north tower may someday be constructed. It has a basement-level pedway connection westward to the south-east corner of the James R. Thompson Center's food court. 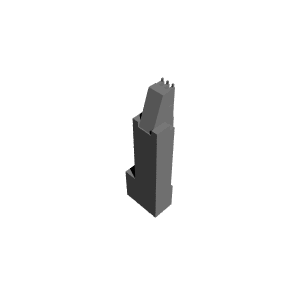 ×
1 collections where you can find 161 North Clark in Chicago, Illinois by jkurstin22