×
See your Inbox
×
×
Click & Print preview
33 2 Add to Collection
Description
Abraham Lincoln: The Man (also called Standing Lincoln) is a larger-than-life size bronze statue of Abraham Lincoln, the 16th president of the United States. The original statue is in Lincoln Park in Chicago, and several replicas have been installed in other places around the world. Completed by Augustus Saint-Gaudens in 1887, it has been described as the most important sculpture of Lincoln from the 19th century. At the time, the New York Evening Post called it “the most important achievement American sculpture has yet produced.” Abraham Lincoln II, Lincoln's only grandson, was present, among a crowd of 10,000, at the unveiling. The artist later created the Seated Lincoln sculpture in Chicago's Grant Park.
This object is part of "Scan The World". Scan the World is a non-profit initiative introduced by MyMiniFactory, through which we are creating a digital archive of fully 3D printable sculptures, artworks and landmarks from across the globe for the public to access for free. Scan the World is an open source, community effort, if you have interesting items around you and would like to contribute, email stw@myminifactory.com to find out how you can help.
Show more Show less
License
Printing Details 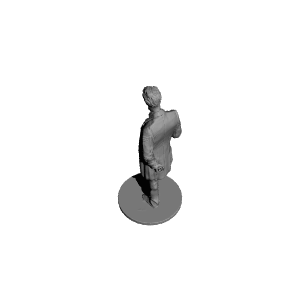 ×
5 collections where you can find Abraham Lincoln 'The Man' Sculpture at the MET, New York by ibudmen
×
Reggie Van Hayes
@countrytime
2
Printed on: ProJet 3500
Material: Others
Posted at: 25th February 2021

When I visited the MET during my trip to NYC, I was very lucky to see this piece even though the particular section had been closed for the day. One of my favorite presidents/Americans. I was so glad to see this up in Scan the World. Keep on Scanning!!