3D
Scan The World
2,517 views 119 downloads
2 collections
Community Prints Add your picture
Be the first to share a picture of this printed object
0 comments

311 South Wacker Drive in Chicago, USA, is a post-modern 65-story skyscraper completed in 1990. At 961 feet (293 m) tall, it is the seventh tallest building in Chicago and the 21st tallest in the United States. It was once the tallest reinforced concrete building in the world. The building is also the tallest building in the world known only by its street address. The lower level of the winter garden was designed for a possible connection via underground passageway to Chicago Union Station. The building also contains three levels of underground parking. The building contains both retail and commercial tenants.The lobby is a two-level (one below ground) 85-foot (26 m)-tall glass-ceilinged "winter garden" with palm trees and a fountain, supported by a steel structure influenced by the Chicago "L" tracks and bridges. It was envisioned as a commuter link or "pedestrian station" serving as a connection from the nearby Union Station through a disused streetcar tunnel under the South Branch of the Chicago River. Raymond Kaskey's bronze sculpture "Gem of the Lakes" looks over the garden from the Wacker entrance. The fountain shell form is taken from the city seal with a heroic figure representing Chicago as the "city of broad shoulders" wearing a cape symbolic of the great engineering feat which reversed the flow of Chicago River. The top of the building is a 105-foot (32 m)-tall translucent cylinder, surrounded by four other smaller cylinders, which was inspired by the massing of the Tribune Tower. This makes it among the most visible Chicago skyscrapers at night, as its crown is brightly illuminated. The five cylinders on top are lit at night by 1,852 fluorescent tubes, and a lantern at the top changes colors for various holidays and special events 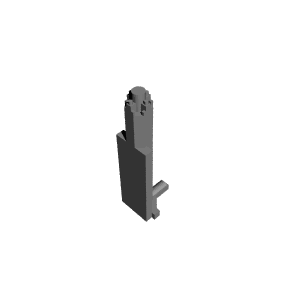 ×
2 collections where you can find 311 South Wacker Drive in Chicago, Illinois by jkurstin22