3D
Scan The World
2,639 views 110 downloads
1 collection
Community Prints Add your picture
Be the first to share a picture of this printed object
0 comments

It’s not the tallest. It’s not the most expensive. But 333 West Wacker is still one of the superstars of the Chicago skyline. The main feature of this office tower is the great blue-green curve of glass that it presents to the northwest, as the Chicago River splits into its Northern and Southern branches. Much has been written about how this curve reflects the setting sun and bathes the building in a fiery display. We haven’t seen it. One freezing February afternoon we sat along Wacker Drive as the sun set behind us and waited for light show. What we saw was the building running through progressively darker shades of green until the sun completely set. We’ll have to try the experiment again in the warm weather. The building is more than just a sweeping arc of glass. The rear of the building has to adhere to the city’s street grid, and does so with a parallelogram marked by notches that create more offices with coveted corner windows. Toward the top the two shapes are reconciled when six floors of the arc bend a little more sharply and intersect with the square form behind. From the sides it looks like sharp angles poking from the graceful glass curtain wall – bat ears jutting out on either side.  The base of this building is also worth noting. Done in traditional stone, it forms an elongated X across the front of the building. The void at the bottom of the shape is the main entrance. This shape adds to the illusion that the main body of the building – the green glass curve – is hovering above the city, represented by the hard stone forms below. This is heightened by the fact that part of the building actually does overhang the sidewalk at two of the edges, where 333 West Wacker’s support columns are visible. 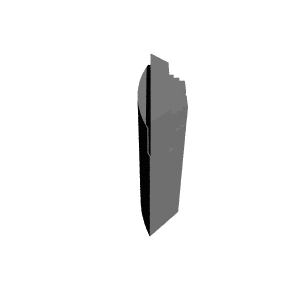 ×
1 collections where you can find 333 Wacker Drive in Chicago, Illinois by jkurstin22