3D
7,090 views 136 downloads
3 collections
Community Prints Add your picture
Be the first to share a picture of this printed object
0 comments

Have you ever worried about leaving your printer running for those long 20 hour prints? With a heated bed, hot extruder, and cheap power supply, there's a lot that could go wrong. I have always worried about leaving my printer unattended and thought that an automatic smoke detection and shutdown would be a great solution. This post contains all the information you need to build a 3D Printer Safety Shutdown. I am not selling anything here. This is merely the information needed to make your own printer shutdown device.

My solution uses an IOT Power Relay from Digital-Loggers.com which has an input that can turn the IOT Power Relay strip on or off with a low voltage signal. The IOT Relay also has a "Normally On" pair of receptacles and a "Normally Off" pair of receptacles. The IOT Power Relay control connector is connected to an off the shelf First Alert Dual Mode Smoke Detector which has an output that can trigger other smoke detectors. The First Alert Dual Mode Smoke Detector is a very sophisticated dual smoke detector that is far better than the Arduino smoke sensors that some people are using to build safety off devices. That trigger output is used to turn off the IOT Control Relay. The power will only stay off only as long as the smoke detector senses smoke so I added a feature to latch the off action. I did this by adding a 5V wall transformer to the "Normally OFF" side of the IOT Relay. That wall transformer powers up when the printer has been shut off and keeps the input to the IOT Relay in the off state. For safety reasons I powered the Smoke Detector with its own 3.3V wall transformer to avoid having 110 VAC in the circuit. You can use a second 5V transformer with 3 power diodes to drop the voltage to 3V. One of the photos shows a pictorial wiring diagram of the design. This device uses two power diodes to provide an "OR" function between the smoke detector output and the 5V wall transformer output. In other words "Keep power off if Smoke is detected OR the 5V wall transformer is on". The diodes block the current flow from conflicting as the device switches from the smoke detector holding the power off to the wall transformer holding the power off. The design works smoothly and requires no Arduino, software, or special parts. The wall transformers can be old cell phone chargers. The total cost for IOT Control Relay and smoke detector is about $50. Add another $15 if you have to buy the wall transformers and power diodes. I’ve included a smoke detector spacer ring which allows the cable to exit on a flush mount installation such as under a shelf.

I present this design as a "USE AT YOUR OWN RISK" solution. I believe that it is safe and relaible. I have been using it in my home for about a year. I occasionally test my detector to make sure it is working. One match proves that my 3D printer will shutdown with just a wisp of smoke.

What can happen:
http://forums.reprap.org/read.php?392,294850
https://all3dp.com/fire-safety-unattended-3d-printer-nearly-burns-house-down 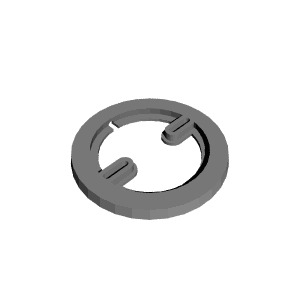