3D
Scan The World
2,674 views 74 downloads
1 collection
Community Prints Add your picture
Be the first to share a picture of this printed object
0 comments

77 West Wacker Drive, previously the United Building, is an office building in the Loop, Chicago. Finished in 1992, the building rises to a height of 668 ft (204 m) with around 944,000 square feet (87,700 m2) of interior space. The building, with 51 floors, was designed by Ricardo Bofill. It was formerly known as the RR Donnelley Building when the RR Donnelley printing company was the primary tenant. RR Donnelley moved its corporate headquarters to a different location in May 2005, and in 2007 the building became the corporate headquarters of United Airlines. The deal included naming rights to the building. This was the world headquarters of Chicago-based United Airlines and its parent company, United Continental Holdings. It also served as the headquarters for United Continental subsidiary Continental Airlines until its certificate was merged with United on November 30, 2011.  The building has a newsletter called "FOCUS", published by Prime Group Realty Trust. By 1990, Keck, Mahin & Cate, a then-prominent Chicago-based law firm, considered moving out of its space in the Sears Tower and moving into a potential new development, which would become 77 West Wacker Drive. Brokers who were familiar with the lease negotiations stated that Sears was trying to keep Keck, Mahin & Cate in the building. Keck, Mahin & Cate decided to move into 77 West Wacker, and the Prime Group, developer of 77 West Wacker, finalized the development of the facility. In 1991, RR Donnelley leased 215,000 square feet (20,000 m2) on floors 9 through 19 for its world headquarters, and Kemper Securities leased 150,000 square feet (14,000 m2). With the lease deals concluded, 77 West Wacker had 86% of its tenant space occupied. Jerry C. Davis of the Chicago Sun-Times said that the remaining space would be too small for some prospective tenants. Davis added that the leases to RR Donnelley and Kemper significantly altered "the complexion of the downtown office market." Keck Mahin & Cate moved from the Sears Tower to 77 W. Wacker in mid-1992; the firm suffered a series of practice group defections and questionable management decisions, and ultimately ceased operation in 1997. 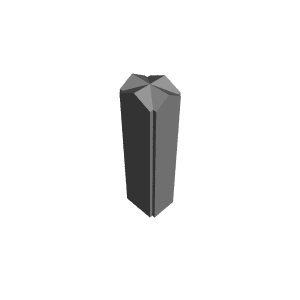 ×
1 collections where you can find 77 West Wacker in Chicago, Illinois by jkurstin22