A Colossal Statue of the Weather God Hadad

3D
Featured Scan The World
2,189 views 65 downloads
Community Prints Add your picture
Be the first to share a picture of this printed object
0 comments

A Colossal Statue of the Weather God Hadad

This is a represenattion of the Weather God Hadad, who originally held in his hands his two symbols: the lightening-rod and the axe. On this round cap are bull horns, the known symbols of divinity. The two lion heads on the socle were originally not attached. Panamuwa, the king of Ja'udi, erected this statue to enjoy the protection of the weather god during his lifetime. 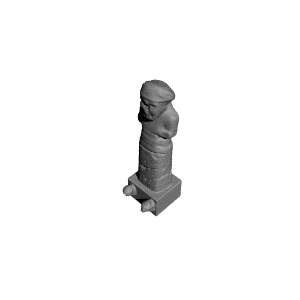