3D
Scan The World
5,963 views 424 downloads
5 collections
Community Prints Add your picture
Be the first to share a picture of this printed object
0 comments

The expression on this man's face is difficult to interpret. Only by looking from below can the knitted brows, tight, thin lips, and carefully arranged grooves around the mouth be observed. This is one of nearly seventy headpieces, or Kopfstucke, that Messerschmidt made after his retirement from the Viennese court. Combining realism and caricature, he explored the shaped and expressions of heads and faces, linking them with different human characters and mental states. Messerschmidt himself suffered from mental illness and one observer said that the artist sculpted these heads hoping to ward off the spirits that invaded his mind. Another thought they were all "very much in his own likeness." This piece was titled "A Hypocrite and a Slanderer" after the sculptor's death. What Messerschmidt intended remains a matter of speculation. 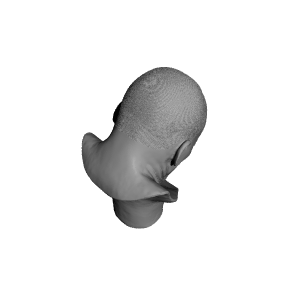