3D
360°
Scan The World
1,474 views 75 downloads
Community Prints Add your picture
Be the first to share a picture of this printed object
0 comments

These riding stirrups were made for the coronation of Charles I, and were later used by William III in the Battle of the Boyne (1690). Charles, I became King in 1625, but his coronation did not take place until the following year; 1626 is inscribed on the leather of these stirrups, next to a crown with the cypher C.R.

A pair of Charles I copper-alloy stirrups, with the cypher of Charles I, the second quarter of the 17th century. Estimate: £40,000–60,000. To be offered in The Exceptional Sale on 6 July at Christie’s London
Although there are no detailed depictions of the trappings of Charles I’s horse, we know that the coronation procession by barge from Hampton Court to Westminster was derailed by strong tides, forcing Charles to make the last part of the journey on a horse — with his feet secured by these very stirrups.

This royal provenance is given credence by entries to the 19th-century journal Notes and Queries, self-described as a ‘medium of inter-communication’ for ‘literary men’. In Volume VII of the 4th Series, printed in 1871, Major Stewart Blacker writes, ‘The stirrups, however, bear evidence… as being the property of an earlier king than William III, viz. Charles I… the leather was looped on, is plainly marked, dotted or inscribed, a royal crown, with the cypher C.R. and the date 1626 beneath.’

Print of Charles I and the Duke of Hamilton (After Van Dyke, 1782)
In the previous edition of Notes and Queries, a correspondent had written: ‘Some time previous to the month of August 1835, I saw in the house… a pair of stirrups, which were then very carefully preserved, and were represented (no doubt truly) as what had been used by King William III at the battle of the Boyne.’

William’s use of accoutrements belonging to his grandfather, Charles I, such as these stirrups, was a symbolic gesture — he had been born and raised in Holland, and invited to take the British throne by influential British Protestants, deposing his Catholic father-in-law James II in the process. It is believed that no other pairs of 17th-century stirrups with a royal association are known to survive. 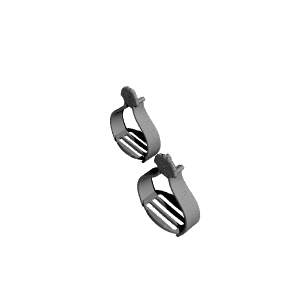