A Queen from the Lewis Chessmen

3D
Scan The World
4,440 views 199 downloads
5 collections
Community Prints Add your picture
Be the first to share a picture of this printed object
0 comments

A Queen from the Lewis Chessmen

The Lewis chessmen or Uig chessmen, named after the bay where they were found) are a group of distinctive 12th-century chess pieces, along with other gaming pieces, most of which are carved in walrus ivory. Discovered in 1831 on Lewis in the Outer Hebrides, Scotland, they may constitute some of the few complete, surviving medieval chess sets, although it is not clear if a set as originally made can be assembled from the pieces. When found, the hoard contained 93 artifacts: 78 chess pieces, 14 tablemen and one belt buckle. Today, 82 pieces are owned and usually exhibited by the British Museum in London, and the remaining 11 are at the National Museum of Scotland in Edinburgh. 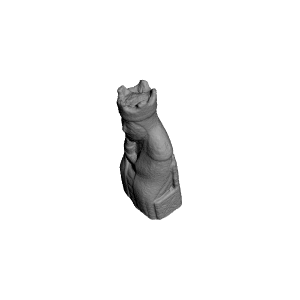