A Roman marble head of a god

3D
Scan The World
1,532 views 118 downloads
Community Prints Add your picture
Be the first to share a picture of this printed object
0 comments

A Roman marble head of a god

This is a marble head-portrait of a Roman god. The idealised, almost androgynous, the beauty of this fine head is typical of the artistic production of the Roman Imperial period when representing deities. In particular sculpture from the Hadrianic and Antonine periods is characterized by an increased emphasis in drill work. As can be seen here, careful attention has been given to the rendering of the hair, where the running drill created deep pockets of shadow among full plastically-rendered curls, producing a rich textured mass that contrasted with smoothly polished skin.
The present head, with its youthful appearance and long curly hair, might represent the god Apollo and was possibly placed in a niche within a place of worship. A similar example of a head with long hair and wearing a wreath is now in the collection of the Lower Saxony State Museum in Hannover, cf. inv. no. EA 1079. Another example with centrally-parted hair and a large wreath is in the Museo Chiaramonti in Rome, inv. no. 1821, cf. B. Andreae, Bildkatalog der Skulpturen des Vatikanischen Museums I: Museo Chiaramonti, Berlin and New York, 1995, pls 242-243.
The wreath is composed of leaves interwoven with spikes of wheat, as a possible reference to fertility and agriculture. A marble sculpture of a bearded man carrying fruits and wearing a similar wreath of wheat in the National Archaeological Museum in Madrid, inv. no. 2704, has been interpreted as an allegory of Autumn. Another young male head of the Hadrianic period, also wearing a wreath with spikes of wheat in the Broadlands, Hampshire, has been interpreted as representing Dionysus, cf. D. Grassinger, Antike Marmorskulpturen auf Schloß Broadlands, Mainz, 1994, pp. 71-72, pls 121-126, no. 15. Other deities which are occasionally represented wearing a wheat wreath are Triptolemus and Silvanus, all worshipped for their connection with fertility, abundance and the harvest. 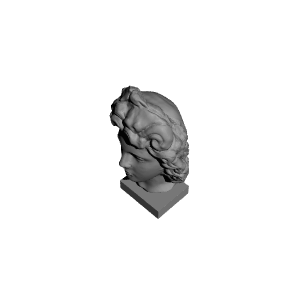