A Roman marble head-portrait of the young Commodus

3D
Scan The World
1,813 views 108 downloads
Community Prints Add your picture
Be the first to share a picture of this printed object
0 comments

A Roman marble head-portrait of the young Commodus

This head-portrait sculpture depicts Commodus at his young age.  Aurelius Commodus Antoninus Augustus - more commonly known simply as Commodus, was the son of Marcus Aurelius and Faustina the Younger and the last member of the Antonine dynasty of Roman emperors. He assumed the Imperial throne at the age of eighteen following the death of his father in 180 A.D. and quickly developed a reputation for megalomania and sexual depravity. Towards the end of his reign, he re-founded Rome and called it 'Colonia Commodiana', and had the months re-named after his various titles. After several attempts on his life, Commodus was finally strangled during a coup which was organised in 192 A.D. by members of the Praetorian Guard, the Imperial household, and his favourite concubine Marcia.
Despite receiving the damnatio memoriae, Commodus was a celebrated post-mortem and received divine honours from his successor Septimius Severus. Thus, many statues of Commodus were made during Severus' rule (193-211), based on those created in Rome during the last five years of Commodus' life.
Official portraits of Commodus have been divided into five types. This portrait belongs to the first type and depicts him as Crown Prince and successor to his father Marcus Aurelius, at the age of fourteen to sixteen years old. The finest example of this type comes from the Villa of Antoninus Pius in Lanuvium and was made between 175-177 A.D., cf. D. E. E. Kleiner, Roman Sculpture, New Haven, 1992, pp. 273-275, fig. 241. According to Kleiner ‘the depiction of Commodus’ hair is a tour de force, as is the rest of the portrait because the artist also succeeds in capturing the boy’s youthful arrogance in his expression’. 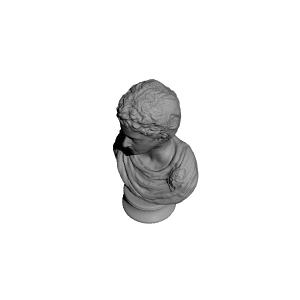