A Roman marble portrait head of a young woman

3D
Scan The World
3,207 views 56 downloads
1 collection
Community Prints Add your picture
Be the first to share a picture of this printed object
0 comments

A Roman marble portrait head of a young woman

The wavy hair is typical of the fashions of the time, which sought to imitate the exaggerated undulating hairstyle of the Empress Faustina Minor (130-176 A.D.), daughter of Emperor Antoninus Pius and wife to Marcus Aurelius. For a similar portrait of a woman, or possibly the Empress herself, see C. Vermeule, Greek and Roman Sculpture in America, Los Angeles. 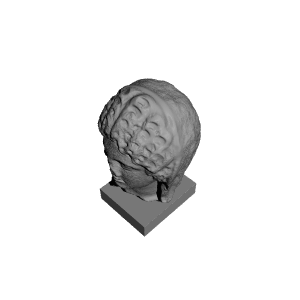