3D
Scan The World
3,309 views 44 downloads
1 collection
Community Prints Add your picture
Be the first to share a picture of this printed object
0 comments

Julia Mamaea (180-235 A.D.) was one of the most powerful women of the Severan dynasty. Mother to the emperor Severus Alexander, she was an effective and admired regent during her son's minority, and continued to exert considerable influence during his reign. Sources regarding Julia's life and her son's rule are scarce, the result of both the damnatio memoriae enacted upon them by their successor, Maximinus Thrax, and the political chaos that followed their deaths, known as the Crisis of the Third Century, when successive competing military leaders claimed the imperial throne. Despite the paucity of sources, Julia is acknowledged as providing a welcome change from her sister, Julia Soaemias, and nephew, Elagabalus, whose purported decadence was hugely unpopular. She appointed the highly-regarded lawyer Ulpian to the Head of the Praetorian Guard, and invited the advice of the most distinguished senators, thereby strengthening the imperial throne by surrounding it with the leading men of the day. She showed respect to the traditional gods of the Roman pantheon, moving away from the unpopular Eastern tendencies of the preceding reign, and ensured the loyalty of Rome's armies through largesse. Through her political acumen, the relative stability of Alexander's reign was ensured, and stands in stark contrast to the turmoil of the following years.

Julia's manifest capabilities could not protect her from the sort of grisly end which had long plagued the imperial household. Following a lacklustre expedition against the Persians in 232 A.D., mother and son travelled north to repel a German attack. Severus Alexander's failure to win over the Rhine legions led to grave dissent, with the troops proclaiming Maximinus emperor in 235. Soldiers were dispatched to assassinate the deposed emperor, and sources claim he was found clinging to his mother Julia in a tent; both were butchered, marking the end of the Severan dynasty, and the beginning of the collapse of the Roman empire.

The present lot is an extremely rare survival, considering the aforementioned damnatio memoriae, when portraits and inscriptions commemorating Julia Mamaea were destroyed at the emperor's behest. Her likeness is veristically rendered, with her characteristic coiffure and averted gaze ensuring her ready identification. For other portraits, see British Museum, acc. no. 1873,0820.733, and the Hall of the Emperors in the Palazzo Nuevo, Capitoline Museums, inv. no. MC457. 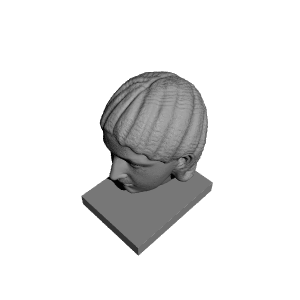