3D
360°
Featured Scan The World
2,127 views 277 downloads
2 collections
Community Prints Add your picture
Be the first to share a picture of this printed object
0 comments

This bust is particularly akin to half-figures of saints in Bellini's and Vivarini's paintings. The physiognomy can be compared with Bellini's drawings of San Antonio Abbas (Windsor) and Man With Turban (Florence, Uffizi). Stylistic features, such as the heads and drapery in Bellini's Madonnas from the last decades of the 15th Century.

The half-figure of an unidentified saint (Possibly Paul the apostle?) bears traces of erosion and may have been placed on the facade of a church. it is akin to the work of Bartolomeo Buon and Antonio Bregno and probably dates to the end of the 15th Century. 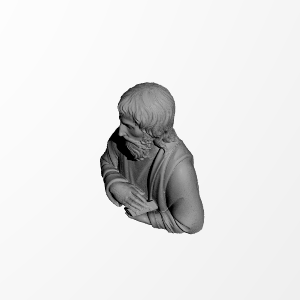 ×
2 collections where you can find A Saint with a Book (Paul?) by SMK - Statens Museum for Kunst