Acroterion fragment with acanthus scrolls at The British Museum, London

3D
Scan The World
2,668 views 126 downloads
2 collections
Community Prints Add your picture
Be the first to share a picture of this printed object
0 comments

Acroterion fragment with acanthus scrolls at The British Museum, London

An acroterion or acroterium is an architectural ornament placed on a flat base called the acroter or plinth, and mounted at the apex of the pediment of a building in the classical style. It may also be placed at the outer angles of the pediment; such acroteria are referred to as acroteria angularia (‘at the corners’).

The acroterion may take a wide variety of forms, such as a statue, tripod, disc, urn, palmette or some other sculpted feature. Acroteria are also found in Gothic architecture. They are sometimes incorporated into the design of furniture.

The word comes from the Greek akrōtḗrion (ἀκρωτήριον ‘summit, extremity’), from akros (‘extreme, endmost’). It was Latinized by the Romans asacroterium. Acroteria is the plural of both the original Greek and the Latin form. 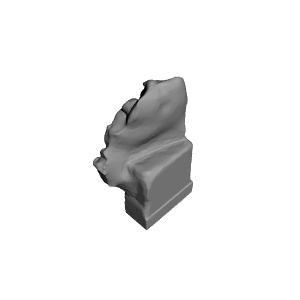 ×
2 collections where you can find Acroterion fragment with acanthus scrolls at The British Museum, London by Scan The World