3D
Scan The World
2,707 views 197 downloads
Community Prints Add your picture
Be the first to share a picture of this printed object
0 comments

The plot is taken from antique mythology. Artemis, a goddess of hunting, whom was seen naked during bathing by Actaeon, turned him into a deer, and the young man was lacerated by his hunting gods. Actaeon was a grandson of Apollo and a son of Aristaeus. Actaeon’s history has been used by masters of painting and sculpture many times. The sculptor depicts the young hunter in movement, with a quiver behind his back, in an abrupt turn – as if he suddenly saw the bathing Artemis. Thanks to this technique, the right hand’s gesture of the hero, which seems to stop movement, can be explained. The sculptor luckily rendered the effect of unexpected obstacle, a complicated view of the figure, changing plastics of the youth’s body transforming into a deer. Spots of light on smoothly polished and stained bronze stress the complex dynamics of the sculpture composition

Actaeon, in Greek mythology, son of the priestly herdsman Aristaeus and Autonoe in Boeotia, was a famous Theban hero. Like Achilles in a later generation, he was trained by the centaur Chiron.
He fell to the fatal wrath of Artemis, but the surviving details of his transgression vary: "the only certainty is in what Aktaion suffered, his pathos, and what Artemis did: the hunter became the hunted; he was transformed into a stag, and his raging hounds, struck with a 'wolf's frenzy' (Lyssa), tore him apart as they would a stag." This is the iconic motif by which Actaeon is recognized, both in ancient art and in Renaissance and post-Renaissance depictions. 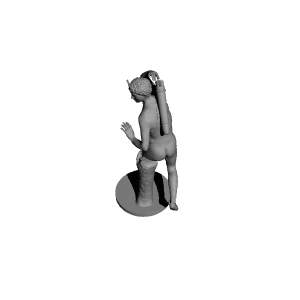 ×
0 collections where you can find Actaeon by Scan The World