Adam at The Musée Rodin, Paris

3D
Scan The World
7,135 views 592 downloads
4 collections
Community Prints Add your picture
Be the first to share a picture of this printed object
0 comments

Adam at The Musée Rodin, Paris

Rodin was strongly influenced by the work of Michelangelo. The direct experience of the Renaissance master's art, both in Italy and in the Musée du Louvre in Paris, seems to have unlocked for Rodin many of the secrets of Michelangelo's modeling. Here they are used to convey the inner anguish and riveted concentration of a powerful but immobilized being. Two of Michelangelo's works explain the meaning as well as the genesis of the strange gestures Rodin gave to Adam, for as Albert Elsen observed in the catalogue for an exhibition titled Rodin at the Museum of Modern Art in New York: the right arm alludes to The Creation of Man, the Sistine Chapel fresco in the Vatican; the left is borrowed from the dead Christ of the Pietà in the Cathedral of Florence. Elsen continued: "the figure is framed by the beginning and end of life, between (these), his body shows its tortured existence." 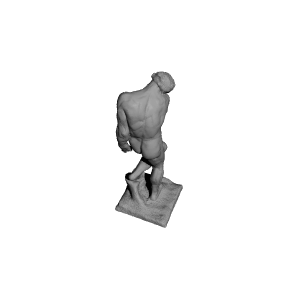 ×
4 collections where you can find Adam at The Musée Rodin, Paris by Musée Rodin