3D
360°
Featured Scan The World
2,570 views 295 downloads
2 collections
Community Prints Add your picture
Be the first to share a picture of this printed object
0 comments

Moltke stayed with his second wife, Marie Christine Wiebel von Wiebelsheim (1774-1808), and her son Carl in Rome from the autumn of 1803 to May 1804. In the spring of 1804 he commissioned two statues with Thorvaldsen, which however had to be canceled for financial reasons. It was a Bacchus and an Ariadne.

During his stay in Rome, in addition to Thorvaldsen, Moltke the German envoy Wilhelm von Humboldt and his wife, art collector and patron Caroline von Humboldt , the Danish archaeologist Georg Zoëga and the Austrian painter Angelika Kauffmann . He traveled with Thorvaldsen to Naples in April 1804 and, still in Thorvaldsen's company, continued to Florence at the end of May of that year. Probably shortly before parting with Thorvaldsen he wrote on 23.5.1804 a greeting in Thorvaldsen's pedigree, N213.

Moltke, who graduated from several German universities, including that in Kiel, made a transition with Jens Baggesen in Germany. As a writer, he wrote poetic, historical and political works and was in favor of the political ideas that originated in the French Revolution. His political sympathies led to a break with the family, where he lost the inheritance to the Bregentved estate.

Thorvaldsen modeled his portrait in 1803-1804. The original model can be found at Thorvaldsens Museum, A212 , while the marble copy is in Kunsthalle zu Kiel, inv.no. Pl 56 . According to Pontoppidan, op. cit., pp. 170-171, the provenance of the marble bust is as follows:

Adam Gottlob Detlef Moltke - given in gift 19.2.1830 to his son Magnus Theodor Moltke (the bust was probably in Thorvaldsen's studio , first in Rome and since 1833 in Copenhagen, until Adam Gottlob Detlef Moltke's death in 1843, then via Carl Moltke , was sent to Magnus) - from here to his son Carl Ferdinand Ludwig Moltke - and from here to his daughter Frieda Kirsten to Karmark near Eckernförde, born Moltke.

On the same occasion Moltke gave his son Magnus the aforementioned bust, he also gave him the portrait of Austrian painter Angelika Kauffmann of his eldest son, Carl, whom Bacchus, called Bacchus Carolus , painted in Rome during the stay of 1803-04, when Carl was 5- 6 years. Its whereabouts are currently unknown. This painting was too old then in Thorvaldsen's custody. 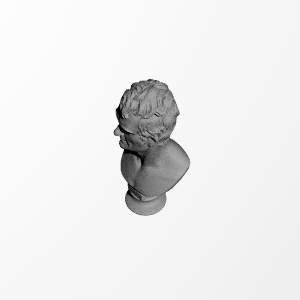