3D
360°
Scan The World
8,055 views 1,497 downloads
10 collections
Community Prints Add your picture
Be the first to share a picture of this printed object
0 comments

Adonis is the most handsome and sought-after young man in Greek mythology, but his birth was defiled in that he was born as the son of a woman called Myrrha, who had had an incestuous relationship with her father. As a punishment, Myrrha was changed into a tree – the myrrh tree. And when the appointed time had passed, the bark of the tree burst and the infant Adonis came into the world. In a certain sense, Adonis was doomed from the start, and he was indeed only quite young when he was killed by a wild boar during a hunt. We can see the tree on which he is supporting himself and the dead hare as references to his birth and death respectively. When the model for Adonis was finished in Rome in 1808 it gave rise to great enthusiasm. The art-loving Bavarian Crown Prince Ludwig commissioned it in marble for his Glyptotek in Munich. 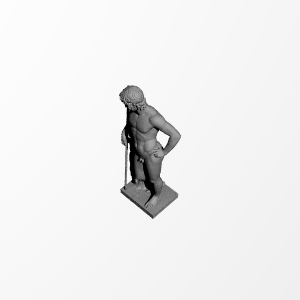 ×
10 collections where you can find Adonis by Thorvaldsen