Adrasteia at The Palace of Versailles, France

3D
Scan The World
2,168 views 173 downloads
Community Prints Add your picture
Be the first to share a picture of this printed object
0 comments

Adrasteia at The Palace of Versailles, France

This is a marble sculpture credited to Nicolas Poussin (1594 - 1665), it is a cast of an original piece from Rome and sculpted in the XVII Cenutry. The sculpture depicts a deity called Adrasteia but the piece is also known as 'Liberality' or 'Abundance'. In Greek mythology, Adrasteia, "inescapable"; also spelled Adrastia, Adrastea, Adrestea, Adastreia) was a nymph who was charged by Rhea with nurturing the infant Zeus, in secret in the Dictaean cave, to protect him from his father Cronus.

She is known to have been worshipped in hellenised Phrygia (north-western Turkey), probably derived from a local Anatolian mountain deity. She is known from inscriptions in Greece from around 400 BC as a deity who defends the righteous.

Adrastea may be interchangeable with Cybele as a goddess associated with childbirth. The Greeks cultivated a patronic system of gods who served specific human needs, conditions or desires to whom one would give praise or tribute for success in certain arenas such as childbirth. 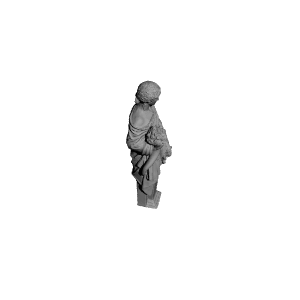 ×
0 collections where you can find Adrasteia at The Palace of Versailles, France by Scan The World