Aeneas and Anchises at The Louvre, Paris

3D
Scan The World
3,525 views 377 downloads
Community Prints Add your picture
Be the first to share a picture of this printed object
0 comments

Aeneas and Anchises at The Louvre, Paris

Enée et Anchise (Aeneas and Anchises) by Pierre LePautre depicts Aeneas, the Trojan hero son of prince Anchises and goddess Venus, leaving Troy in flames with his father, Trojan Palladium in clutch, on his shoulders.

LePautre sculpted the marble, from a wax cast by François Girardon, during his stay in l'Académie de France à Rome in 1697. It was transported to France in 1715, and installed at the Château de Marly, where it was finished with the assistance of Jacques Bousseau in 1716 before being moved to the Tuileries Gardens in 1717, as a matching piece for Lepautre's Arria et Pætus.

After the defeat of Troy in the Trojan War, the elderly Anchises was carried from the burning city by his sonAeneas, accompanied by Aeneas' wife Creusa, who died in the escape attempt, and small son Ascanius (the subject is depicted in several paintings, including a famous version by Federico Barocci in the Galleria Borghese in Rome. The rescue is also mentioned in a speech in Shakespeare's Julius Caesar when Cassius attempts to persuade Brutus to murder Caesar). Anchises himself died and was buried in Sicily many years later. Aeneas later visited Hades and saw his father again in the Elysian Fields. 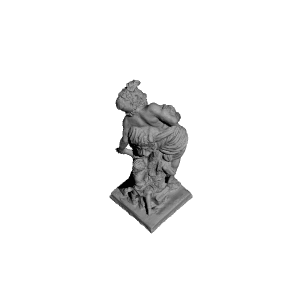 ×
0 collections where you can find Aeneas and Anchises at The Louvre, Paris by Scan The World