3D
Scan The World
1,371 views 39 downloads
Community Prints Add your picture
Be the first to share a picture of this printed object
0 comments

This sculpture, which dates from around the 9th century A.D., is from an archaeological site of Dharasu in Uttarakhand. The sculpture depicts Agni, the Vedic fire god of Hinduism. He is also the guardian deity of the southeast direction and is typically found in southeast corners of Hindu temples.

It was 3D scanned with a Structure Scanner attached to an iPad Mini 4 on May 11, 2018, in the Museum of Himalayan Archaeology and Ethnography at HNB Garhwal University in Srinagar (Garhwal), Uttarakhand, India. The statue was laying down as it was not stable in a vertical position, so its back was not 3D scanned. Courtesy of HNB Garhwal University. Research supported by the Humanities Research Center at Virginia Commonwealth University.

This object is scanned by Virtual Curation Lab 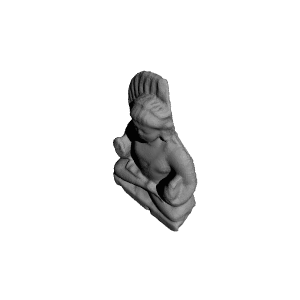 ×
0 collections where you can find Agni From Dharasu by VCL