3D
Scan The World
4,430 views 431 downloads
Community Prints Add your picture
Be the first to share a picture of this printed object
0 comments

Air is a lead or bronze sculpture, by Aristide Maillol.

He modeled Dina Vierny in plaster in 1938, and casts were made after his death. It is an edition of six. Examples are located at the Kröller-Müller Museum, Yale University Art Gallery, Jardin des Tuileries, J. Paul Getty Museum, Norton Simon Museum, and Kimbell Art Museum.

Description from The Getty Museum:

This monumental nude seems to float in space. Although cast in lead, the smooth, grayish-blue surface actually enhances the form's light, buoyant appearance. Perched delicately on her right hip, the figure's extended legs and left arm create a strong horizontal, echoed in the plinth beneath her. Resting on an imaginary center of gravity, she teeters between immobility and movement, suspension and flight. The nude's face and figure are idealized--rather than a portrait of an individual, it is a personification of air.

In 1938, the city of Toulouse in southern France commissioned Aristide Maillol to commemorate the pilots of the pioneering airmail service, l'Aéropostale, who had been killed in the line of duty.Air was cast from the plaster model for this monument. Its form was initially inspired by a small terra cotta sculpture Maillol had made several decades earlier depicting a reclining figure resting on wind-blown drapery. The artist often used the female form to symbolize aspects of nature like the sea, the seasons, and even a subject as elusive as air. 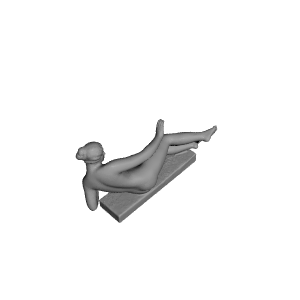 ×
0 collections where you can find Air at The Jardin des Tuileries, Paris by Scan The World