3D
360°
Scan The World
4,172 views 511 downloads
5 collections
Community Prints Add your picture
Be the first to share a picture of this printed object
0 comments

Al-Khazneh (Arabic: الخزنة‎; "The Treasury") is one of the most elaborate temples in the ancient Arab Nabatean Kingdom city of Petra. As with most of the other buildings in this ancient town, including the Monastery (Arabic: Ad Deir), this structure was carved out of a sandstone rock face.

The structure is believed to have been the mausoleum of the Nabatean King Aretas IV in the 1st century AD. It is one of the most popular tourist attractions in both Jordan and the region. It became to be known as "Al-Khazneh", or The Treasury, in the early 19th century by the area's Bedouins as they had believed it contained treasures. 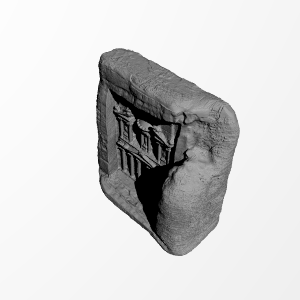 ×
5 collections where you can find Al-Khazneh, الخزنة‎ by Scan The World