×
See your Inbox
×
×
Click & Print preview
126 3 Add to Collection
Description
This sculpture by Artur Lowenthal was sculpted in the 20th Century and depicts Albert Einstein. Einstein was a German-born theoretical physicist and philosopher of science.  He developed the general theory of relativity, one of the two pillars of modern physics (alongside quantum mechanics). He is best known in popular culture for his mass–energy equivalence formula E = mc2 (which has been dubbed "the world's most famous equation"). He received the 1921 Nobel Prize in Physics "for his services to theoretical physics, and especially for his discovery of the law of the photoelectric effect". The latter was pivotal in establishing quantum theory.
This object is part of "Scan The World". Scan the World is a non-profit initiative introduced by MyMiniFactory, through which we are creating a digital archive of fully 3D printable sculptures, artworks and landmarks from across the globe for the public to access for free. Scan the World is an open source, community effort, if you have interesting items around you and would like to contribute, email stw@myminifactory.com to find out how you can help.
Show more Show less
License
Printing Details 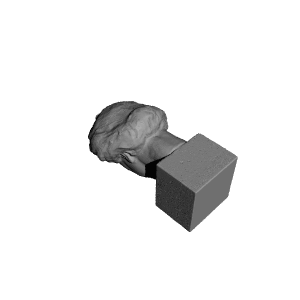 ×
19 collections where you can find Albert Einstein at The Collection, Lincoln, UK by Threedscans
×
Prósper
@prospegto
21
Printed on: STARTT
Material: PLA
Posted at: 22nd May 2022