Alcibiades in the house of the Hetairai

3D
360°
Scan The World
2,050 views 116 downloads
1 collection
Community Prints Add your picture
Be the first to share a picture of this printed object
0 comments

Alcibiades in the house of the Hetairai

This marble relief panel depicting Alcibiades, a Greek orator, statesman and general, brought up in the house of Pericles of Athens, and a pupil and friend of Socrates who tried to interest him in the world of philosophy.
Plutarch writing much later [Life of Alcibiades 36.2] tells how Alcibiades often gave himself up to pleasure and liked to visit courtesans (hetairai).

The relief is a part of a famous exhibition in Gabinetto Segreto. 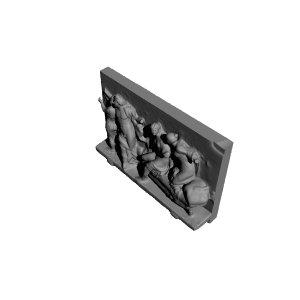